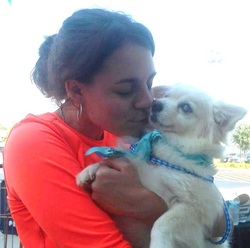 Sam is a huge advocate for the "underdogs" consisting of several misunderstood breeds such as Hounds, Rottweilers, Black Dogs, Animals in need of medical assistance as well as animals with Special Needs that others would otherwise overlook or give up on.
Sam grew up around animals including several rescue animals (primarily dogs). Rather than implementing more costly programs and expansions in the sheltering/rescuing world,  Sam's main objective and goal is to advocate that more laws to protect these voiceless animals are put into effect.  Such laws should include strict licencing laws for animals in an effort to control the unwanted population. Since everyone has their favorite breeds (including Sam herself) and many of said breeds are working and/or service animals, Sam is not totally against the idea of responsible breeding and believes that rather than putting judgement on responsible breeding, licensing laws and other screening programs should instead be put into affect in order to support, control, and manage responsible breeding  as well as pet ownership in an effort to stop puppy mills, pet stores, "backyard breeding", inbreeding, hoarding operations, and irresponsible pet ownership in general.  Sam also believes that there should be laws to protect ALL animals from the elements and that no animal should ever be placed onto a chain in a yard to only serve basically as a lawn ornament.